Treasures in My Chest 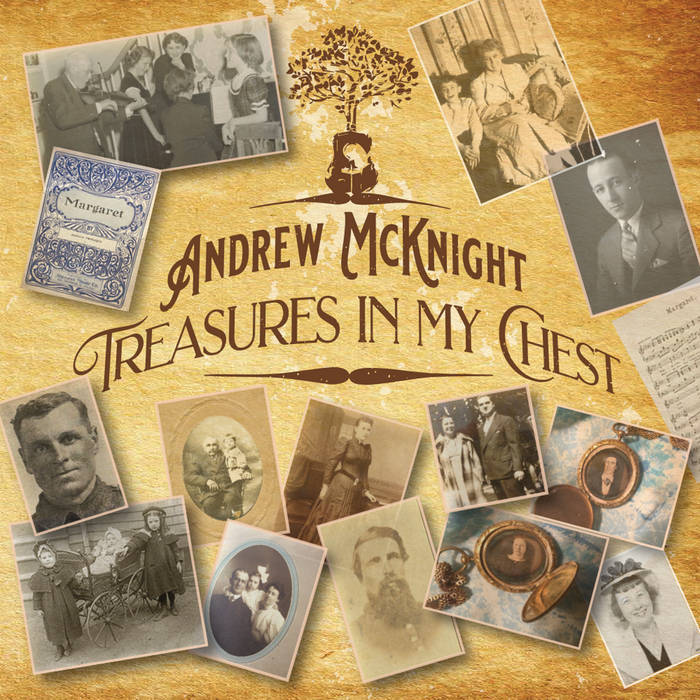 Treasures in My Chest is a full-length music album AND companion book drawn from his experiences researching his family history over the last six years. The album is a defiant throwback to the days before song streaming, carefully sequenced to produce a stunning aural journey of discovery.

The core band includes longtime Beyond Borders drummer Lisa Taylor along with Andrew on acoustic, slide and electric guitars. They are ably joined by Lisa's daughter Rachel on cello and Michael Rohrer on upright and electric bass (The Bitter Liberals, Loudoun Symphony). In addition to guest appearances by past bandmate Jeff Arey (Dang Varmints!) on mandolin, Jon Carroll (Mary Chapin Carpenter) on accordion and organ, and Tony Denikos on harmony vocals, Andrew's father Warren (keyboards), sister Alyson (piano) and daughter Madeleine (fiddle) all contribute a track. Coupled with a piece written and published in 1906 by his Scottish great-grandfather Andrew McKnight, Treasures in My Chest musically spans five generations of his family.

The powerful tools of modern genealogy led him to some extraordinary discoveries about music in his heritage; how his great-grandfather's American descendants had endured difficult childhoods and pursued music in many forms, largely unaware of each other. He encountered fascinating discoveries about fortunes lost on the Titanic, ancestors falling on the battlefields of the Civil War, and impoverished immigrants braving weeks on the stormy Atlantic in the hope of a new life and a better start.

Why a book? It started as an outgrowth of a new reality; how to convey the liner notes and context of a recording with no "container" in the era of streaming and downloads. The freedom to not have to fit artwork and information in a booklet for a CD jewel box first encouraged Andrew to plan an easy to read pamphlet. But the incredible stories he uncovered and experienced demanded more than a paragraph here and there, and before he knew it a full length paperback book took shape - part inspiration, part memoir, and part "how to" guidance for others wanting to learn more about who they are.

The album will be mainly available in digital download form (limited number of CDs printed) with the book in softcover print or in Kindle/e-reader version. Treasures will be available as a digital download in December, and the book and album package in both print and digital form will be officially released in late February 2020.