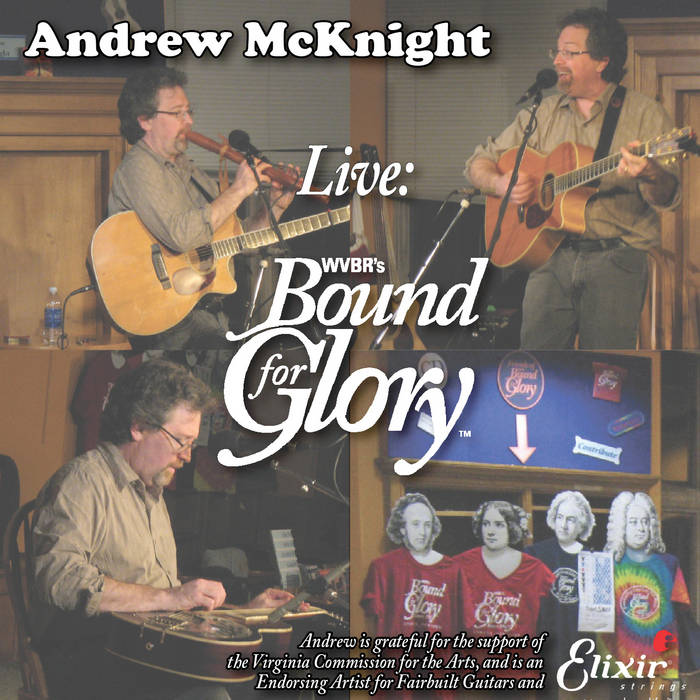 The download is free, but you can pay whatever you want and it all goes to help support Andrew in his continued work in music - thank you for whatever you are moved to contribute!

Recorded Nov. 8, 2015 during the 49th season of Bound for Glory! This show captured a great show during his nearly 8,000 mile odyssey in the Odyssey through 12 states, during his appearance on the venerable "Bound for Glory" radio concert in Ithaca NY. Producer Phil Shapiro and his crack broadcast crew caught the warmth, humor and energy of Andrew with an intimate audience in high fidelity, and we are delighted to share it with you. Whether you are a longtime fan of Andrew's work, or recently discovered him for the first time (perhaps on this tour!), you'll want to have this concert to enjoy time and time again.

"Live: Bound for Glory" is about 91 minutes, features 16 songs and numerous stories and anecdotes, some of which are captured for the first time. Four of the songs are unavailable on any of Andrew's studio recordings - "One More Year (A Farmer's Prayer)", "By a Craftsman's Hand", "Guitar Man" and the "Kindergarten Love Song (Love Makes the World Go 'Round)". This is the first recording of Andrew's solo dobro version of "Chemical Voodoo", and his native American flute improvisation that segues into "Wishing" is given its own track and title for the first time - "Catalooch", a Cherokee word meaning roughly "waves of mountains without end". Also include never-before released live versions of "Ansel Adams", "Cedars" and "Count Your Blessings" (all from "Something Worth Standing For").